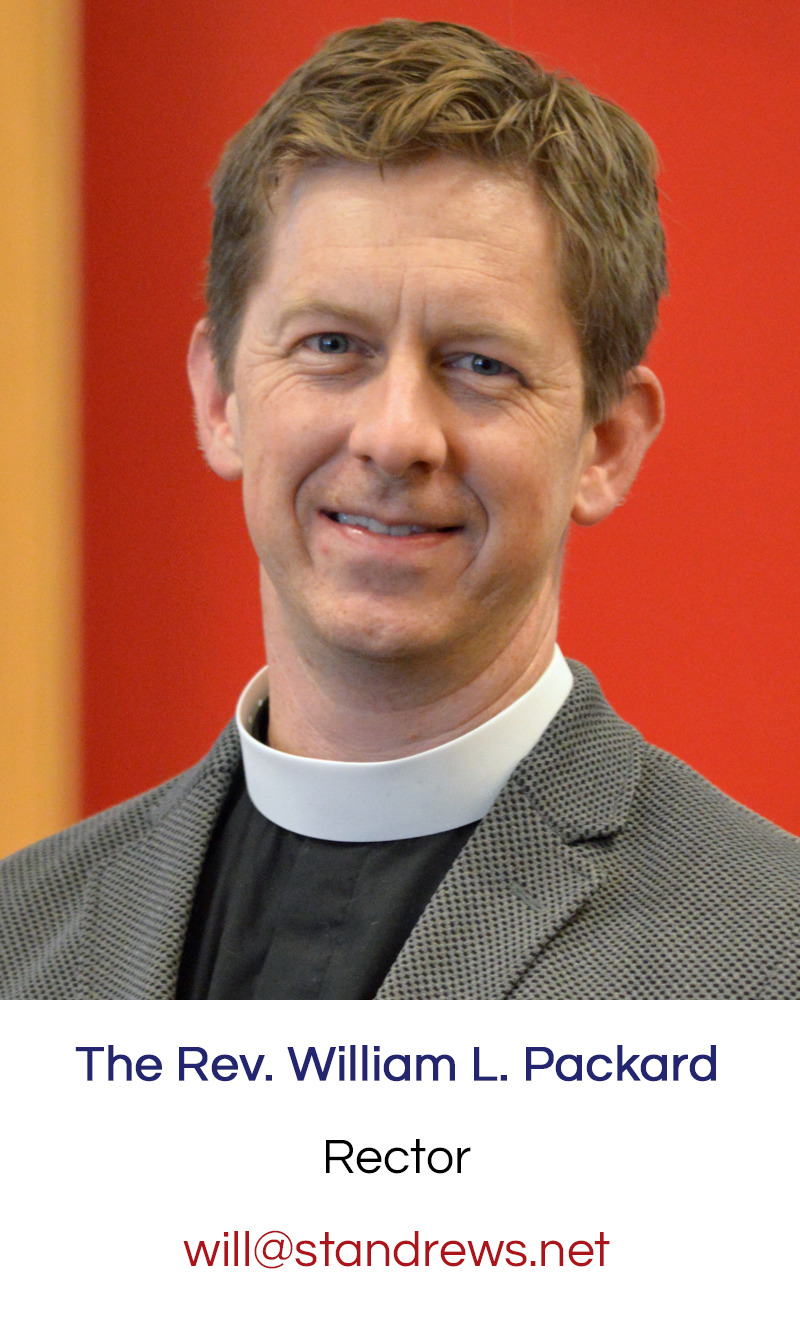 The Rev. Will Packard became the Priest-in-Charge of St. Andrew’s on July 1, 2020. Will came to us from St. David’s in Ashburn, Virginia, with a focus on youth formation, worship, pastoral care, and other areas of ministry. Will is a graduate of Sewanee: The University of the South where he learned his love of nature and, most recently, of the Virginia Theological Seminary. Prior to entering seminary, Will worked for the Diocese of Virginia as the clerk to the Rt. Rev. Peter James Lee and he spent several years working in downtown D.C. for The Pew Charitable Trusts in their Philanthropic and Government Relations departments.

As a priest, Will sees a passion for pastoral care in carrying out the Gospel. As a collaborative leader, he works with the Vestry and all of the people of St. Andrew’s to discern how we may embody the radical hospitality of Christ’s mission. With energy, he looks forward to getting to know the community.

Will resides in Burke with his wife Paige and two daughters, Emma and Libby. They recently welcomed a new puppy Lucy and Will has already taken on her theological training. Will and his family are settling into their new home and are excited to be a part of the St. Andrew’s community.

At the 2022 Annual Meeting (Feb. 13th) it was announced that Will accepted the call from the Vestry to become our 3rd Rector. Will was officially installed on May 15, 2022. 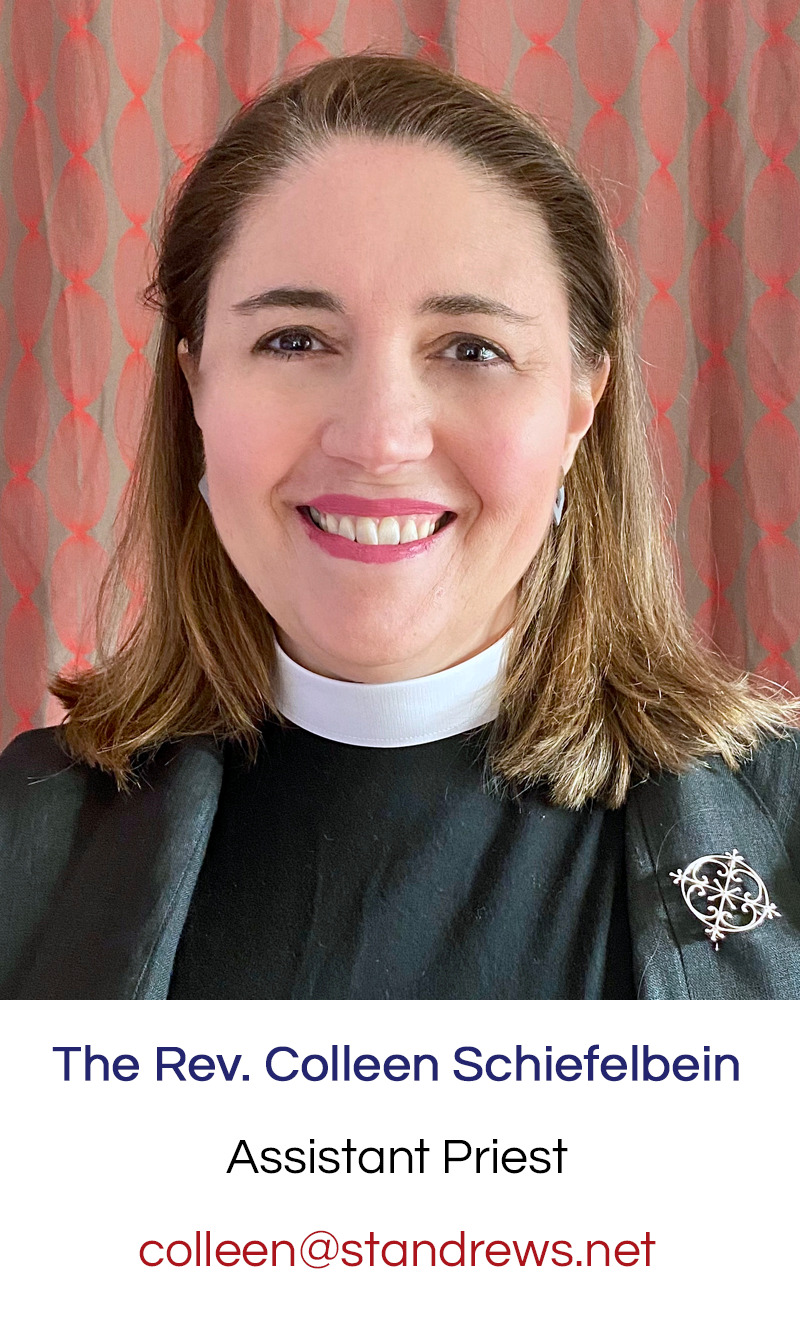 Colleen’s dad worked for the military, and she grew up moving across the southern US and overseas about every three years until college. After college, she married a US Marine and spent 24-years moving to new places across the southern US. Through these moves, she learned that God is present no matter where she goes and no matter how challenging the situation. Colleen and Pete have four children ages 19, 16, 12, and 3 years. They have struggled and then grown stronger through deployments, deaths of family members and friends, and through continual change and chaos. They love to travel as a family and can’t wait to explore more of God’s creation again. 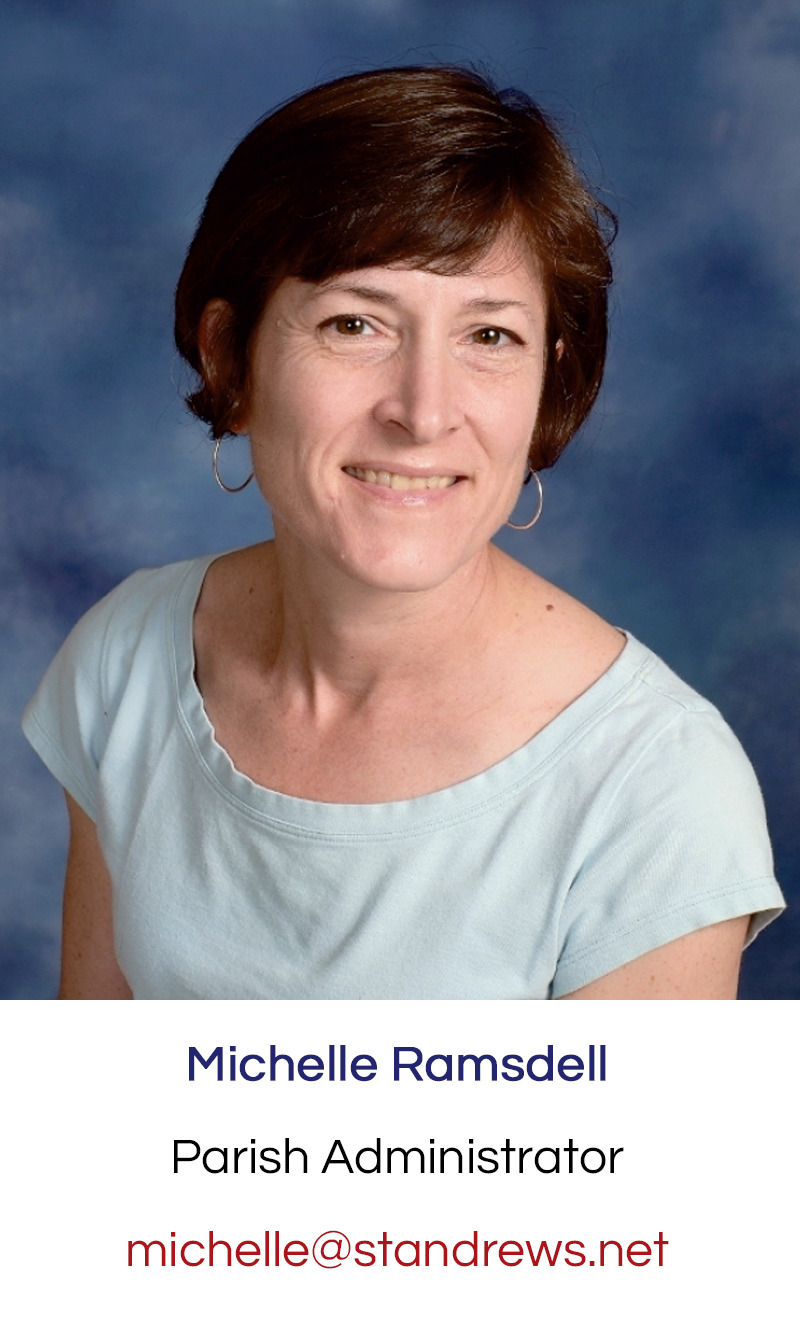 As Parish Administrator, Michelle oversees daily financial tracking of the parish and preschool, which includes accounts payable and receivable, and payroll. In addition, Michelle works with our Treasurer to present monthly financial statements, including separate Financial and Endowment Committee reports to the Rector and the Vestry on all matters regarding the current financial state of the church and for use in budget forecasting. Michelle assists the Treasurer in compilation and reporting of the budget. She also assists clergy with matters regarding church membership and use of church property.

Michelle is a UVA graduate, with a Bachelor of Science in Commerce, and worked as a Certified Public Accountant before switching to the church world. She is an avid runner and keeps the staff and Vestry on their toes for all things financial. 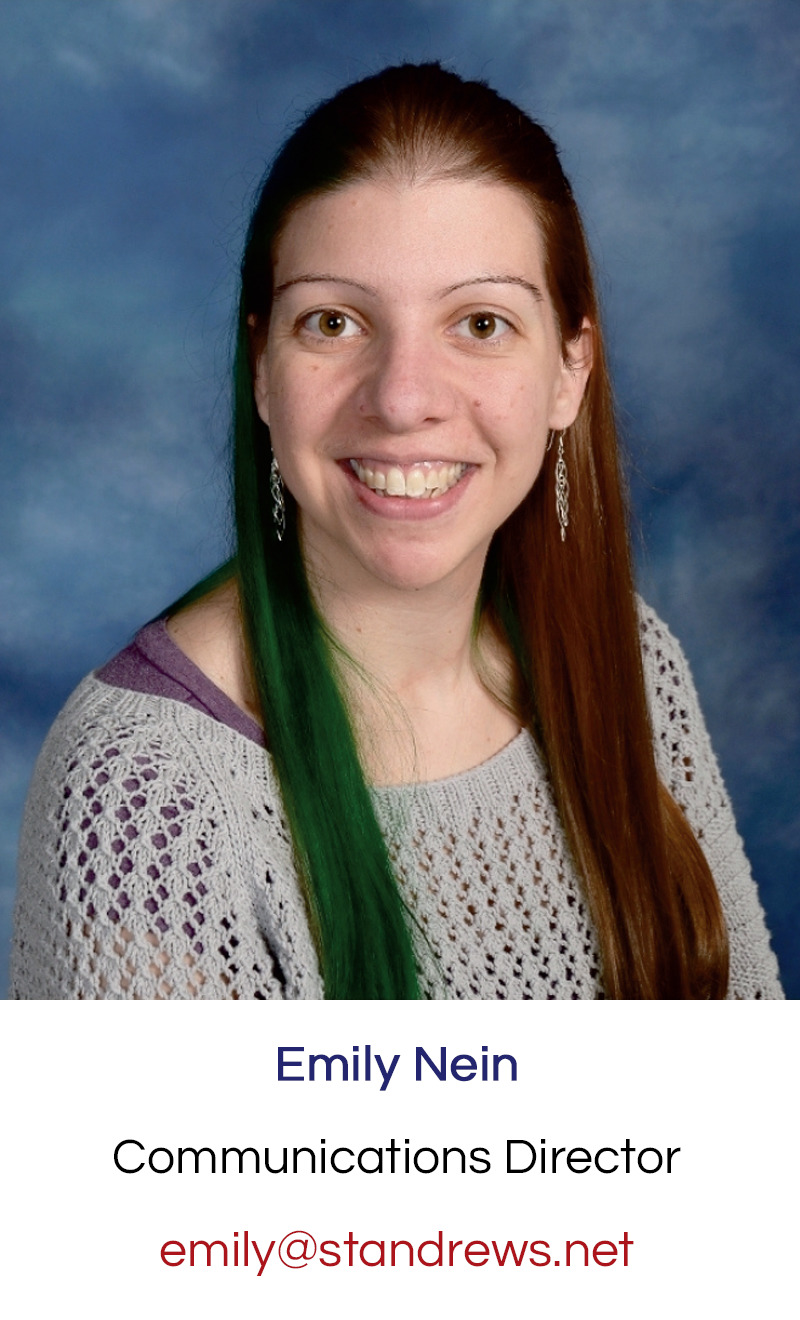 As the Communications Director, Emily may be the first voice you hear when you call the office. Emily creates all publications, digital and printed; manages the website and Facebook/Instagram pages; takes and collects photos from various events; handles the ducks; and otherwise assists in any way she can. She and Michelle, the Parish Administrator, do their best to keep the clergy in line.

Emily joined the staff in 2013, but has been around quite a lot longer, as she was baptized and raised at St. Andrew’s. Graduating from St. Andrew’s Preschool in ’89, Emily went on to join the Youth Choir, become a reluctant acolyte, and was a founding member of St. Andrew’s Workcamp, which she led for the past few years. She went to Catawba College in Salisbury, NC, and earned a degree in Philosophy & Religion. 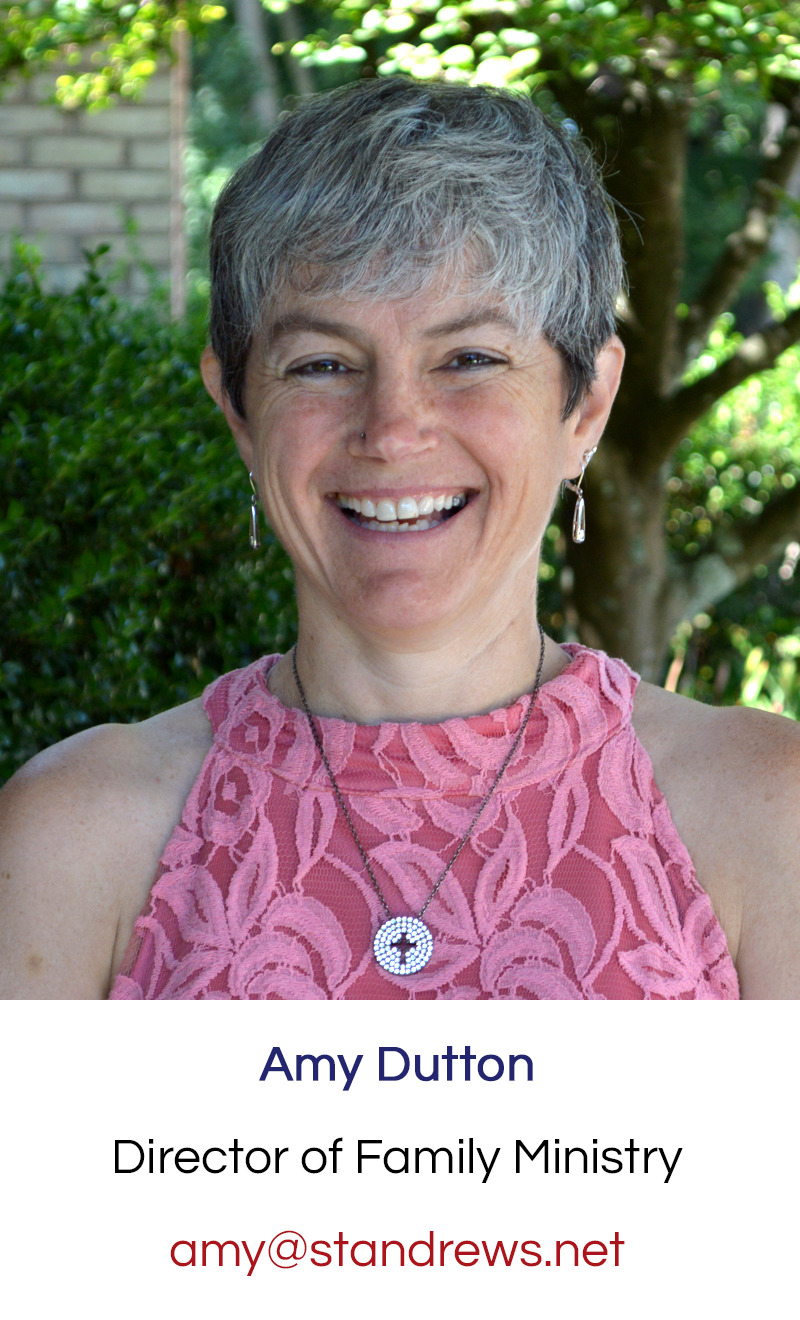 As Director of Family Ministry, Amy focuses on the need to better integrate the increasing number of families, newcomers, and current parishioners into the life of our parish. She leads programs for families in the parish, such as Godly Play, Vacation Bible School, Movie Night, Parents Night Out, and Parents and Littles (PALs).

Amy also serves as liaison to our Preschool where she is the chapel leader, and fosters connections between the Preschool and the Parish. Amy assists Vestry and others in leading newcomers’ events and incorporating new families and members into the life of our very active parish. 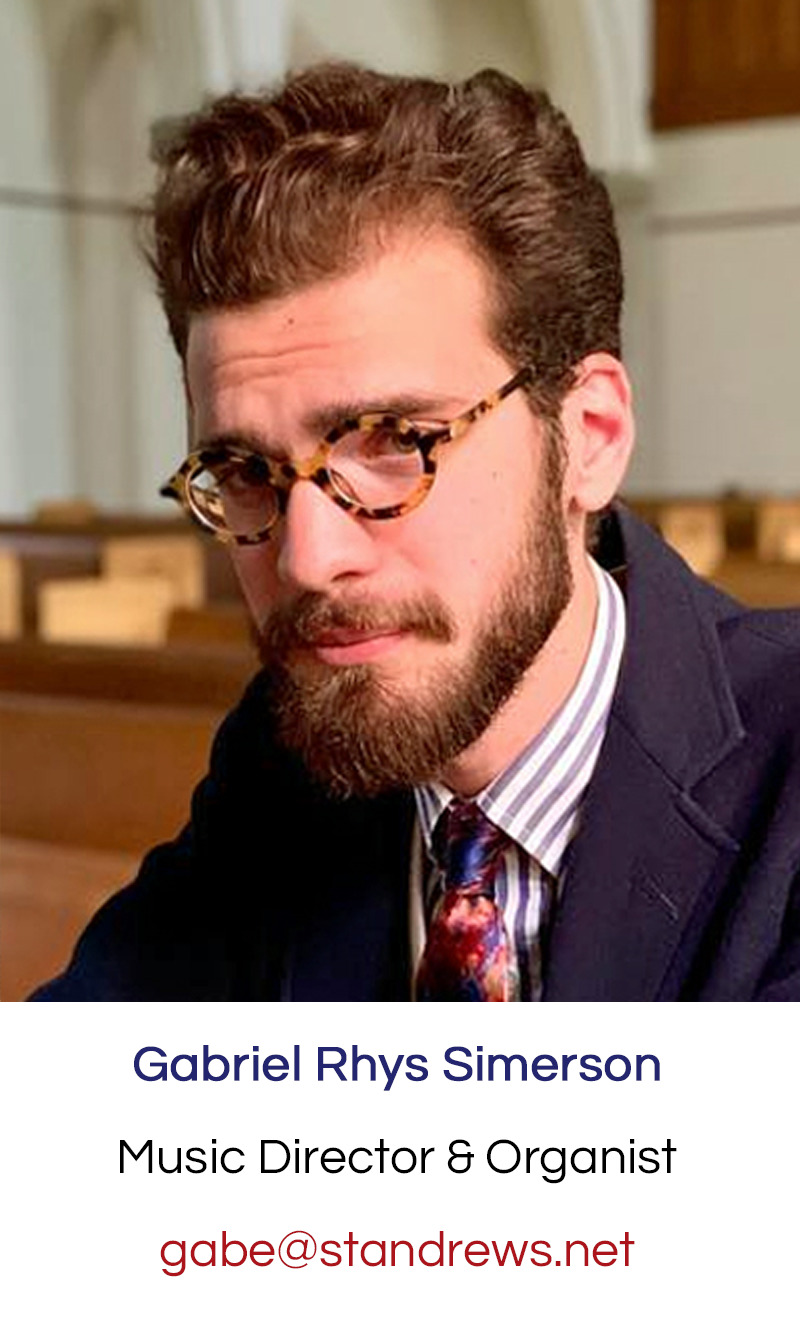 A native of greater New Haven, Connecticut, organist-choirmaster and composer Gabriel Rhys Simerson is the Episcopal product of a Southern Baptist father and a Greek Orthodox mother. As a singer, he has served the acclaimed choirs of St. Paul’s, K Street, St. Thomas’s, New Haven, and Old Saint Paul’s, Edinburgh, and secularly has been a member of the American University Chamber Singers and the Edinburgh University Chamber Choir, making a number of solo appearances domestically and on tour in Greece and Poland.

His choral works, described as “transatlantic,” “felicitous,” and “lovingly tonal,” have enjoyed annual premieres, and performances in the United States, England, and Scotland, including at Wells Cathedral and Washington National Cathedral.

At age 19, Gabe was appointed Interim Director of Music and Organist of St. Thomas’s, New Haven (a bench once occupied by Charles Ives). He has also served as a guest or interim organist and organ scholar at All Souls Woodley Park, Bradley Hills Presbyterian Church, Yale Divinity School, and the Berkeley Divinity School at Yale. He has been published in The American Organist, the Journal of the Association of Anglican Musicians, and The Diapason.

Gabe’s church-related affiliations include the Association of Anglican Musicians, the Anglo-Catholic History Society, and the Society of King Charles the Martyr, and he avidly collects ancient and interesting Books of Common Prayer and associated ephemera. When not making church music, he attends shape note singings in the Shenandoah Valley and beyond and enjoys hikes through the mountains, collecting vintage menswear, and excursions deep into antique shops and used bookstores. 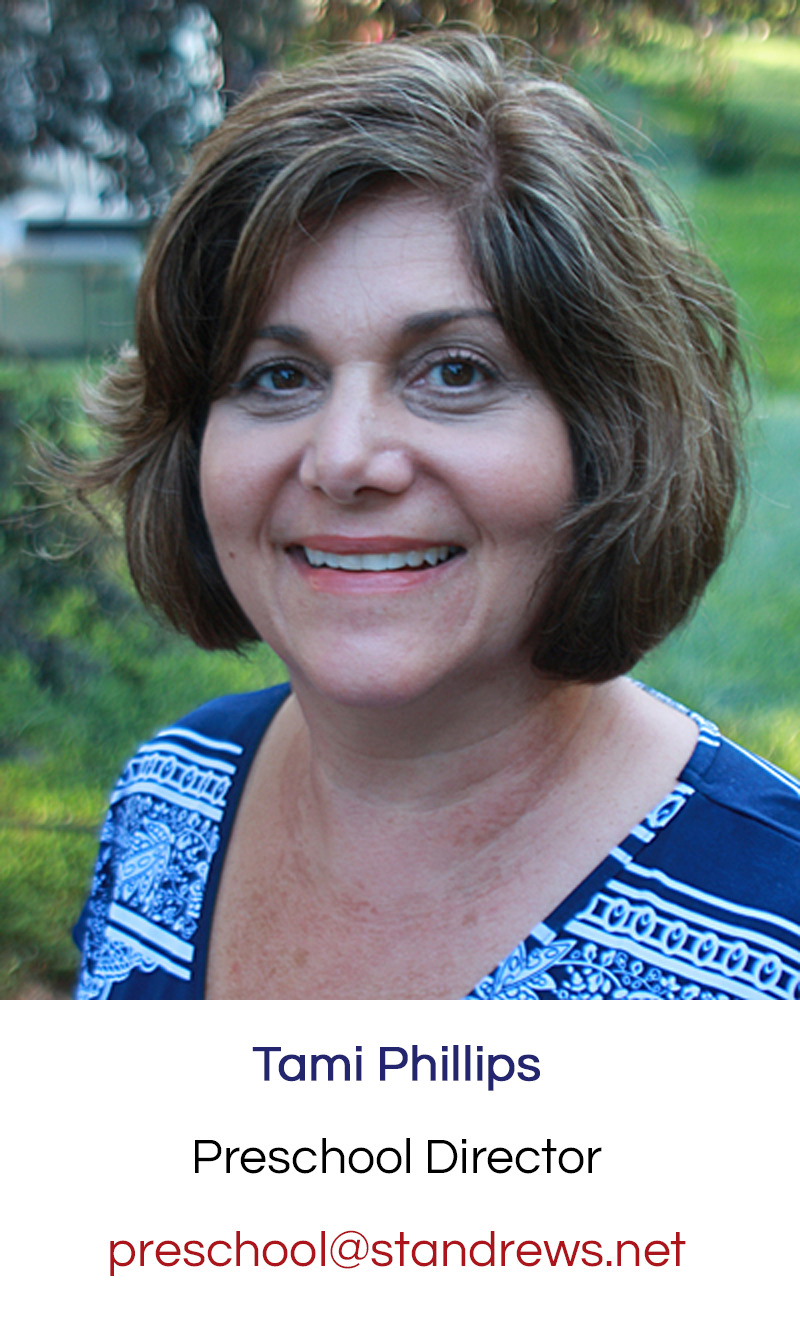 Tami Phillips became the preschool director in the Fall of 2019, but has been with St. Andrew’s Preschool since 2012. Previously at St. Andrew’s, Tami was the Discovery Room Teacher for 7 years, a school parent, board member, and substitute teacher. Tami began her teaching career in Miami, where she was an elementary teacher for fifteen years. Tami earned a master’s degree in Reading from Barry University in Miami, Florida and was an adjunct professor. She and her husband have two children, both alumni of the preschool. Tami says that preschool science “is not only exciting but necessary…discovering, inquiring, and experimenting develops life-long learners.” 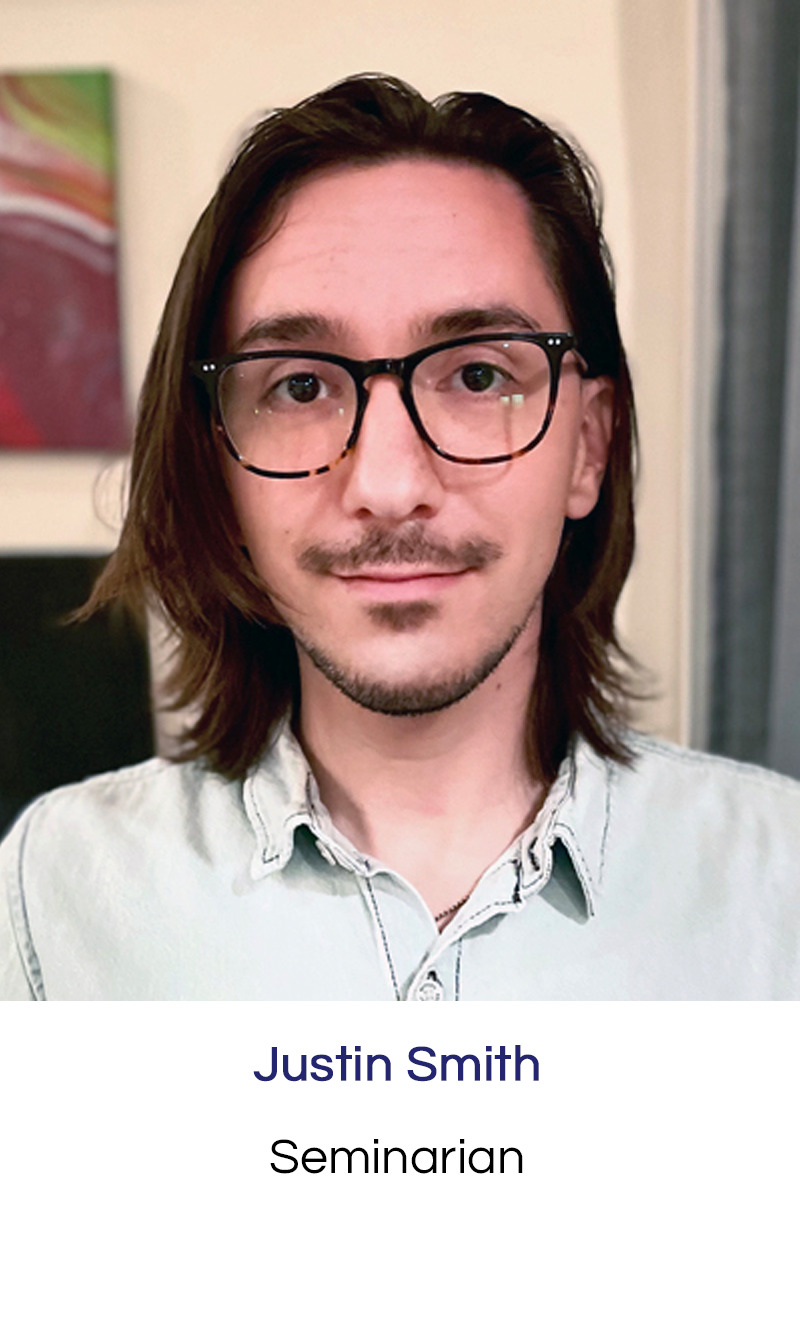 Justin is a seminarian at Virginia Theological Seminary in the second year of his MDiv program. Prior to his time at VTS, Justin studied religion and theology at the University of Chicago; Belmont Abbey College; and the University of North Carolina in Greensboro, from which he graduated summa cum laude. As a life-long student of theology, Justin maintains a wide-ranging interest in a variety of topics related to Christian thought and history. Among his favorite topics are those which continue to shape and inform his sense of call to ministry, especially new and emerging theologies surrounding disability, mental health, and LGBTQ+ issues. As a seminarian, Justin seeks to learn methods for incorporating theological education and scriptural formation into the life and ministry of a parish. Justin’s sense of call to ministry is animated by his emphasis on the interrelated themes of Christian service, witness, and charity – themes he seeks to carry with him into his time at St. Andrew’s.

Originally from North Carolina, Justin moved to Alexandria in August 2020 with his husband Sean and their two pets: Piper, their cat, and Scooby, their dog. They stay together in family housing at VTS, where they enjoy the daily rhythms of life lived in community. Some of Justin’s non-theological interests include taking in nature with Scooby; reading or watching movies with Piper; and travelling both domestically and internationally with Sean. Sean and Justin have visited nine countries and nineteen states together and hope to travel when able. Justin has enjoyed getting to know both the VTS and Alexandria communities thus far and is excited about getting to know the St. Andrew’s community as well.