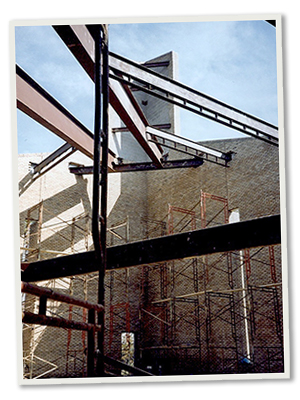 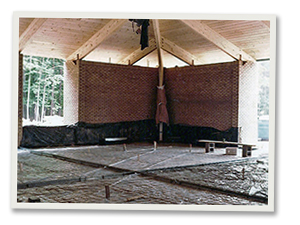 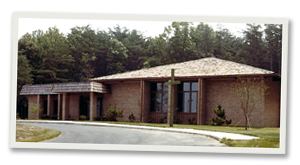 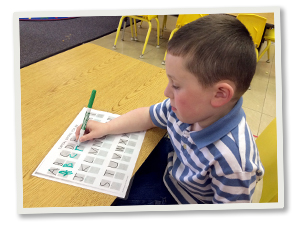 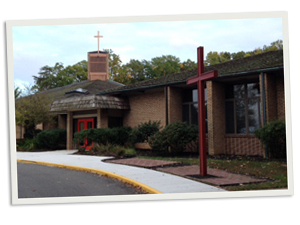 St. Andrew’s was organized as a mission of St. Christopher’s, Springfield in November 1972. During the first two years, our church did not have permanent clergy. A variety of leaders, including clergy and lay readers from St. Christopher’s, a local Army chaplain named Alan Brown, and faculty from the Virginia Theological Seminary, notably the Rev. Reginald Fuller, led the mission services.

In October of 1974, The Reverend Randall Prior was appointed as St. Andrew’s first full-time vicar. Randall had previously been Assistant to the Rector of St. Stephen’s Episcopal Church in Richmond. Under Randall’s early watch, the congregation experienced a period of rapid growth, church building and expansion, and an ever-growing outreach to the Burke and Springfield communities.

Services were moved to Orange Hunt Elementary School in December 1974. The creativity and dedication of the early church members can still be seen in the altar of our current chapel.  Created and constructed by one of the early church members, Lee Overson, for use in the services at Orange Hunt School, the altar also served as a storage unit for the nascent church during the week.

St. Andrew’s became a church under the supervision of Suffragan Bishop John A. Baden in January of 1975. While it might seem to be an unusual equine connection, two famous racehorses played a role in getting our present church built.  These two racehorses were Secretariat who was the 1973 Triple Crown winner and arguably the greatest racehorse in the history of American thoroughbred racing, and Riva Ridge who missed the Triple Crown by a single race in 1972.  St. James-the-Less Church in Ashland, Virginia lent $100,000 to the Diocesan Mission Society, thanks partly to the track records of the two horses.  The loan was made possible by a bequest to St. James from Christopher Chenery whose stable near Ashland owned both horses.

The generosity of St. James and the Chenery Family – and the winning ways of the horses – helped fund the initial construction phase of building our church.

On January 21, 1978, Bishop Baden officiated at the ground breaking on the current Sydenstricker Road property.

In December of 1983, construction of the new nave and education wing began. It was completed in March of 1985 and in September of that year the St. Andrew’s Episcopal Preschool welcomed its first youngsters into the new classrooms.

Following Randall Prior’s retirement of 37 years ministry to St. Andrew’s and the Diocese of Virginia in 2010, The Reverend Gary Goldacker served as Interim Rector as the church conducted its first search process for a new Rector.

The Reverend Tim Heflin was called to be the second Rector in September of 2012, bringing to the church previous management experience and chaplaincy in healthcare, experience as an elementary day school chaplain, and a focus on welcoming, spiritual formation, and better defining outreach efforts.

Future expansion of our campus is a renewed focus: a successful capital campaign from 2008-2010 called “Ministry for Tomorrow” (MFT) provided resources which raised $1.6 million to renovate the Nave, Narthex, and Chapel; install a new pipe organ; and establish a fund to purchase 2 acres of property adjacent to the church. The church purchased this property in 2014 and is in a parish-wide discernment process to determine how God’s spirit is leading us to use the property for both needs at St. Andrew’s and for the community.

In April of 2019, after almost 7 years with us, Father Tim was called back to his home state to be the Rector of St. James in Alexandria, LA. Starting on July 14, 2019, we welcomed the Rev. Rosemari Sullivan to serve as our interim while we search for a Priest-In-Charge.

The Rev. Sullivan helped us begin our transition period as our Priest-in-Charge search began in ernest. She was joined by Deacon Stephen Crippen on August 25, 2019.

When the Rev. Sullivan’s term was up at the beginning of February 2020, Stephen took over and soon was leading us through the very beginning of the COVID-19 pandemic. Shortly after Easter, Stephen moved with his family to Seattle and was ordained to the priesthood on June 30, 2020.

A few months after Ed arrived, the Rev. William L. Packard was called to become our Priest-in-Charge on July 5, 2020.

On Feburary 13, 2022, during the Annual Meeting, the Vestry called and Will agreed to become St. Andrew’s third Rector.